Deshchytsia met Moldovan chief negotiator Eugen Carpov in Chisinau and Transdniestrian leader Yevgeniy Shevchuk and chief negotiator Nina Shtanski in Tiraspol to discuss the preparations for the next... END_OF_DOCUMENT_TOKEN_TO_BE_REPLACED

Vienna, 17 January 2013 - Ukraine’s Foreign Minister Leonid Kozhara today announced his country’s priorities for the 2013 OSCE Chairmanship, with the progress on resolution of protracted conflicts, combating trafficking in human beings and promotion of the media freedom amongst key issues.

Addressing the OSCE Permanent Council, he said that Ukraine’s priorities for 2013... END_OF_DOCUMENT_TOKEN_TO_BE_REPLACED 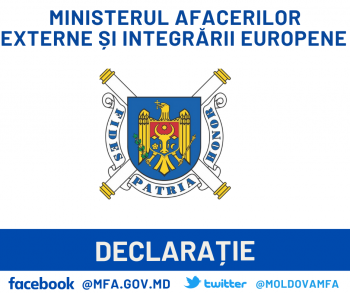 November 5, 2020, Chișinău - The Ministry of Foreign Affairs and European Integration of the Republic of Moldova vehemently condemns the acts of vandalism that took place recently in the Jewish Cemetery in Chișinău. 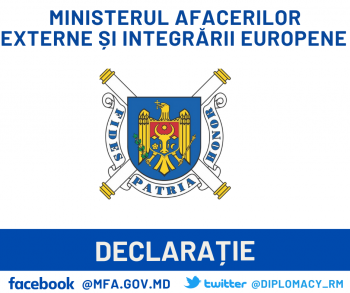 October 1st, 2020, Chișinău - In connection with the news published in the international press regarding the alleged relocation of potential asylum seekers to the Republic of Moldova, the Ministry of Foreign Affairs and European Integration informs that such issue is not on the agenda of Moldova's dialogue with other states, including the United Kingdom of G

July 14, 2020, Chișinău - The Ministry of Foreign Affairs and European Integration of the Republic of Moldova is following with concern the events on the Azerbaijani-Armenian border, where in recent days there have been armed clashes, resulting in losses of human lives.

July 13, 2020, Chișinău - Today marks the 25th anniversary of Moldova's accession to the Council of Europe, the first pan-European organisation to bring together under its umbrella 47 states that share common values, such as democracy, the rule of law and respect for fundamental human rights.

13/07/20 | Comunicate de presa
Cooperation between the Republic of Moldova and the EU, on the agenda of the discussion between Minister Oleg Țulea and Commissioner Oliver Varhelyi 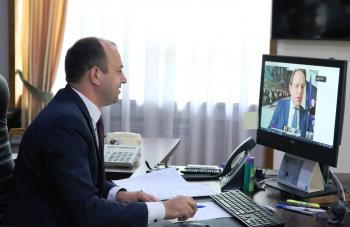 13 July 2020, Chișinău - Advancing cooperation between the Republic of Moldova and the European Union in the next period, EU assistance and the reform priority agenda were discussed today by Minister Oleg Țulea and European Commissioner for Neighbourhood and Enlargement Oliver Varhelyi.